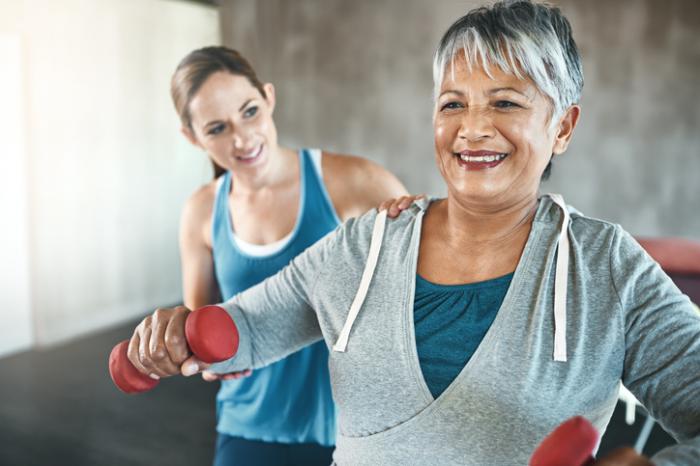 Exercising for at least 2.5 hours every week may help maintain physical health and quality of life for patients with Parkinson’s disease, a new study suggests.

Researchers suggest that exercising for at least 2.5 hours weekly may benefit patients with Parkinson’s.

From an analysis of more than 3,400 patients with Parkinson’s disease, researchers found that those who engaged in a minimum of 150 minutes of physical activity a week experienced much slower declines in health-related quality of life (HRQL) and mobility over 2 years, compared with patients who exercised less than 150 minutes weekly.

What is more, the team found that patients in the advanced stages of Parkinson’s may benefit most from increasing their physical activity by 30 minutes each week.

Study leader Miriam R. Rafferty, Ph.D., of the Center for Education in Health Sciences at Northwestern University in Chicago, IL, and colleagues recently reported their findings in the Journal of Parkinson’s Disease.

Parkinson’s disease is a progressive condition characterized by tremors, stiffness of the limbs and trunk, poor balance and coordination, and mobility impairment.

According to the Parkinson’s Disease Foundation, up to 1 million people in the United States are living with Parkinson’s, and around 60,000 new cases are diagnosed in the U.S. every year.

Previous research has indicated that exercise may yield benefits for patients with Parkinson’s. One study reported by Medical News Today in 2015, for example, found that patients with early Parkinson’s who engaged in a 40-60-minute exercise program three times weekly experienced improved mobility and balance over 6 months, resulting in a reduction in falls.

For this latest study, Rafferty and colleagues set out to determine how regular exercise might benefit HRQL and mobility for patients with Parkinson’s over a 2-year period.

The research included 3,408 patients with Parkinson’s disease who were a part of the National Parkinson Foundation Quality Improvement Initiative (NPF-QII), which collects data on clinical care and outcomes for Parkinson’s patients at 21 sites across North America, Israel, and the Netherlands.

Patients engaged in at least three clinic visits over 2 years. During these visits, data were collected on the number of hours patients exercised each week, as well as information on functional mobility and HRQL.

Functional mobility was assessed using the Timed Up and Go (TUG) test, which times patients as they rise from a seated position, walk 3 meters, turn around, and sit back down. HRQL was self-reported through The Parkinson Disease Questionnaire (PDQ-39).

Compared with patients who engaged in less than 2.5 hours of physical activity each week, those who did at least 2.5 hours of exercise weekly demonstrated a significantly slower decline in HRQL and mobility over the 2-year period.

This finding was true for patients who exercised regularly from study baseline, as well as those who began exercising for at least 2.5 hours a week during follow-up.

“The most important part of the study is that it suggests that people who are not currently achieving recommended levels of exercise could start to exercise today to lessen the declines in quality of life and mobility that can occur with this progressive disease,” says Rafferty.

Boosting exercise by 30 minutes a week beneficial in advanced stages

The researchers also looked at the effects of 30-minute increases in weekly exercise among patients with Parkinson’s.

The team found that increasing physical activity by 30 minutes each week led to improvements in both HRQL and mobility. Interestingly, the greatest improvements in HRQL were seen among patients in the advanced stages of Parkinson’s.

The researchers say this finding has important implications for making physical activity more accessible to patients with advanced Parkinson’s disease. They note that such patients may have more severe mobility impairments, making participation in current exercise programs challenging.

The study was not designed to pinpoint what types of exercise are best for patients with Parkinson’s, but the authors say that engaging in any form of physical activity is better than being sedentary.

“People with [Parkinson’s disease] should feel empowered to find the type of exercise they enjoy, even those with more advanced symptoms.”

CHECK OUT THE FULL ARTICLE ON MEDICALNEWSTODAY.COM

← Physical Therapy as Good as Surgery for Carpal Tunnel Syndrome: Study
→ Physical therapy: Who can benefit and how can it help?